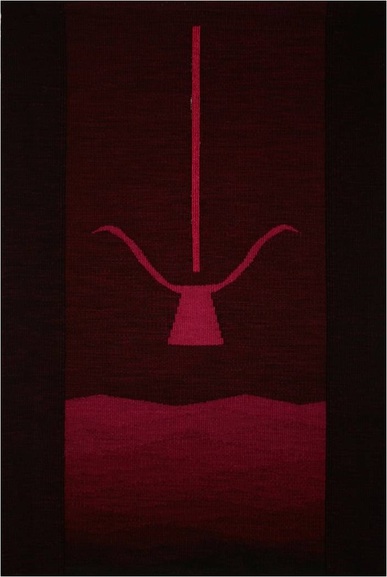 Eminent weaver Ann Greenwood, who is noted for the spirituality of her work, created the striking piece in the chancel especially for St Paul’s.

In 1996 when parishioner Beryl Rule wanted to give something to the church in memory of her husband Brian. The then vicar, the Revd Bill Peacock, suggested a Greenwood weaving which could be used as a prayer focus. After a number of discussions with Ann,  several ideas emerged: the weaving should include the sea, because St Paul’s is a bayside parish, and there should be a tree of life to symbolise hope and Brian’s strong faith.

Ann dyed the wools, putting much thought into the choice of colours - deep magentas and purples, with one vibrant silk strip of deep pink.

The black border acts as a frame or a doorway, inviting the viewer inside.
At the bottom of the weaving curved lines suggest the waves of the sea.
In the centre, the highly stylized tree of life has also been seen as a chalice, or arms upraised to God, while the brilliant pink shaft from Heaven represents the outpouring of His grace.

Ann, who had learnt a lot about Brian, became very involved with the project and wrote: “I feel very privileged to be part of Brian’s ongoing life in the world. It was a special piece to weave and has given me much in terms of my own spiritual journey. It belongs to St Paul’s and I hope will bring peace and solace and hope to those who sit with it.”

The weaving was dedicated on the eleventh of May, 1997. Underneath it is a memorial plaque with the words: “Behold, I make all things new” (Revelation 21:5).

Designed by Jon Web Design and Powered by Sitebuilder.